I don't know if it's because I have a so-so memory or if it's because I'm running around so crazy wild these days, but I'm in love (well, serious crush anyway) with the camera in my cell phone. Look at the following two photos: 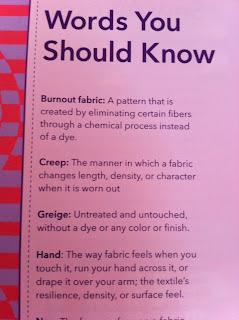 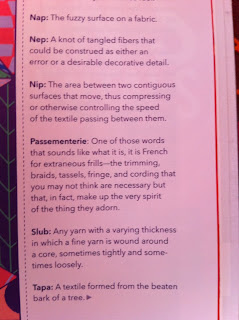 I don't even remember where I saw this. All I remember is that I couldn't take it with me, I was in a hurry, and that I would absolutely *die* if I couldn't take away terms like "creep," "nep," and "slub" for use in a poem later on. I didn't have a clue on how to pronounce "griege" (I know now that it kind of rhymes with "sage"). I've made a note in my ever-running ideas notebook; one day, I'll throw some slubs and neps into a poem. (I already have a creep or two. Wait, that was just some guy I dated briefly.)

So *this* photo-idea-chunk actually ended up in a poem: 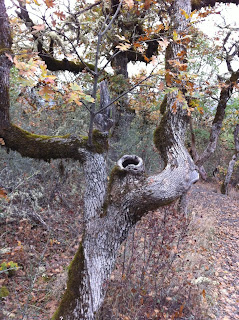 At first, all I could think was that it looked like a headless-many-armed-monkey tree. The more I looked at the photo later though, the more it became tragic rather than comic. I ended up with these lines to end my poem "Trees of Lower Table Rock, November" quoted here:


again sorrowful madrones and black oaks,
stripped of leaves, with boughs like so many arms,
they take us down from our perch,
see our way out, brush us by
with branches spliced and twined and reaching.


I don't think I would have gotten to this place by memory alone. I had to dwell on the photo.


Sometimes a photo merely fulfills a need to be social. A facebook friend asked for quick snaps of work spaces from other artists and writers. I obliged with: 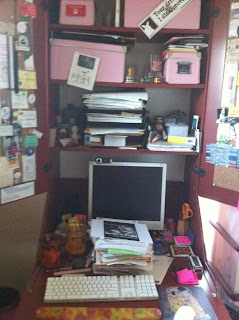 I gave up a lot of information about myself with this picture. One, I'm a slob, but I tend to try to hide it (note big, disorganized pile right smack in the middle). Two, I can't throw away any of my writing-related tchotchkes and trophies (bonus points to those who can identify some key logos). Three, I have a wacky Allen Ginsberg doll, and I think it has warded off measles, scurvy, and rickets over the years.


And last, access to a cell cam is an awesome way to cheer myself up every now and again. Earlier this year, I went to visit a poet friend in another state. I was thrilled to see I had made the family's chalkboard agenda for the day: 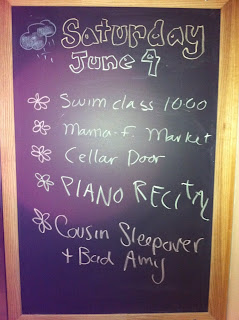 (Don't miss the daily weather forecast in the upper left, and yes, now you know one of my nicknames.) If I'm having an especially crazy day, I pull this photo up for a little laugh, and it works. Like. A. Charm.

Amy MacLennan has been published in Hayden's Ferry Review, River Styx, Linebreak, Cimarron Review, Folio, and Rattle. Her poems have appeared in the anthologies Not a Muse from Haven Books and Eating Her Wedding Dress: A Collection of Clothing Poems from Ragged Sky Press. One of her poems is available as a downloadable broadside from Broadsided Press, and she has an article on social networking appearing in the 2011 Poet's Market. Her chapbook The Fragile Day was released from Spire Press in September 2011.
Posted by CLBledsoe at 1:00 AM

A terrific posting, Amy. I had
the pleasure of guest blogging
a while ago. To get a peek at
the cortical apparatus that seems
to make we writers tick is fascinating.
My favorite word in this blog entry
is "passementerie", which I will
utilize whenever the opportunity
presents itself.

Thanks so much, Glenn. I hope you have a fair number of chances to work that one in. For me, I think I'll have maybe one shot. I just need to go find more frills in my life.